News and Updates from DLT and our Members
Digital Literacy Trust / DLT Members / Benetech / Is Your Human Rights Software Inclusive? 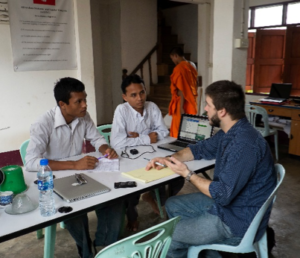 Is Your Human Rights Software Inclusive?

Five assumptions that limit your global user base

When you have reliable, constant access to running water, it can be difficult to conceive of the daily lives of those who do not. The same is true of access to electricity, the internet, adequate bandwidth, and this year’s smartphone or laptop. And yet, billions of people who Silicon Valley should serve live in technology ecosystems very different from those inhabited by software designers.

Here are 11 Apps that direct you to the right places

Where does software go wrong? Here are five assumptions tech developers make that limit the inclusivity of their software:

The availability of offline functionality can be critical to securing human rights information. Whether due to lack of connectivity in a rural area, overburdened networks during urban protests, or simply the costs of mobile data, designers must not assume users can immediately upload data to the cloud. Tools designed to support activists must include options to work offline and built-in security to store information until it can be backed up or uploaded when connection is available. Examples include offline maps like Osmond, Benetech’s human rights documentation software, Martus, and the Guardian Project’s Bazaar, which uses p2p data transfer to share applications between, phones without an internet connection.

You and I might grumble if the coffee shop Wi-Fi is intermittent, but for human rights activists operating in many regions, there are few alternatives. When connections are available, they are often slow. Tools designed for activists should accommodate low bandwidth by designing and testing with this constraint in mind. Developers can provide low bandwidth options or alternatives like torrents or split downloads. Within applications, features that require connection should run in the background instead of interrupting work. Best practices in optimizing websites and webtools for low bandwidth, like providing alternative text for images, overlap with making them accessible to people with disabilities – another important consideration!

As the price of mobile technology decreases, smartphones become more and more common around the world, but they are not commonplace everywhere. According to The Mobile Economy 2016 report by GSMA Intelligence, only 40% of mobile subscribers in the developing world have smartphones. That rate is likely lower among vulnerable populations such as the poor, women, rural communities or minority groups. Until everyone has a smartphone, developers should consider harnessing feature phones to feed into current tools. The power of USSD codes has fueled the move to mobile money, and SMS can be a successful tool for violation reporting or election monitoring.

Many tech workers are young, “digital natives” who have grown up immersed in internet-connected technology. But many defenders of human rights around the world, though the same age as their tech counterparts, have had only limited exposure to software and face a learning curve. Tools designed for human rights work must be well designed, intuitive, and, to a large extent, self-documenting. The secure messaging app Signal is a good example that keeps design minimal and is icon-based. SimplySecure, a service organization focused on user experiences for privacy preserving software, has some helpful tips for keeping design inclusive.

Global access to education has gone up sharply in recent years, yet for vulnerable groups this may still be an obstacle. Tech workers must not assume users will always have advanced literacy and numeracy skills. Luckily, many devices include image, audio and video inputs. For example, WhatsApp’s voice note allows those with limited literacy (or visual disabilities) to bypass English-style keyboards by recording and sharing voice messages. Successful software solutions will move away from text-based or Euro-centric design. Inclusive tools make full use of microphones and cameras built into devices.

As technology companies try to reach a global user base, designers have begun to turn their attention to the use cases of human rights defenders. However, if tech designers want their tools to be useful around the world, they need to be sure they are making those tools accessible to all of their potential users. By checking assumptions and designing for the real challenges human rights defenders face, designers can make tools more effective today and easier to adopt later. The future will bring more smartphones, faster and more widespread connectivity, and a generation of activists fully confident in utilizing technology. But while building tools for this future, tech must also serve those fighting for human rights in the present.

Rachel Bernstein is a Human Rights Program Manager at Benetech, a Silicon Valley-based nonprofit whose mission is to empower communities by creating scalable technology solutions.